Five findings from a quick analysis of bicycle research


People often think that because I'm a professor, I "have the summer off." That's far from reality. I may not be teaching classes during the summer, but I am still managing the research center I direct, reviewing draft dissertations, conducting research, writing, going to meetings, speaking at conferences, and applying for research grants. It was during the latter activity that I got distracted (which is more likely to happen in the summer) with analyzing metrics of research on bicycling. I've been reading a bit lately about research metrics, including this analysis of citations that concluded that 1% of "scientists" produce a large share of all the research, and Tom Sanchez's analysis of citations of research by urban planning faculty. Like any good researcher, I'm quick to find faults with the methods and analysis. But like any good data geek, I'm also easily lulled into crunching some numbers myself. So even after I got the answer I needed for my proposal after a few clicks, I couldn't help myself from exploring the data more—and sharing what I found.

My method was simple. I conducted a search in Web of Science using the topic bicycl* (to include bicycle, bicycling, etc.). I limited the search to the categories of transportation, transportation science technology, social science interdisciplinary, and urban studies. This was to minimize research that uses the term "bicycle" for other meanings. It does, however, likely exclude some medical research, e.g. on the health effects of bicycle seats, as well some social science or historical research. I also limited the findings to articles, proceedings, and book chapters published in English.

Here are my five quick findings. (And, please excuse the poor table formatting. Posting on a blog is new for me.)

1. The amount of published research has boomed in the past five years.
As shown below, little research was published prior to 1990. This is somewhat consistent with federal funding for bicycle and pedestrian infrastructure in the U.S. and shifts in policy prompted, in part, by ISTEA (passed in 1991). The amount increased in the early 2000s, but really takes off starting in about 2007. If I had the time I would compare this to the volume of all publications regardless of topic and perhaps some other topics, e.g. asphalt. By the way, there are 44 publications from 2014 in the Web of Science database so far. 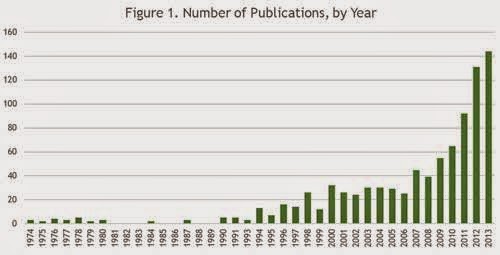 2. Follow me to where the research happens (she says, somewhat kiddingly)


My alma maters UC Berkeley and UC Davis, followed by my current home, Portland State University, top the list of the organizations of the authors of research published in the past ten years (2004-2013). More seriously, the list reveals some concentration of activity. Those three universities represent one out of every 10 publications. Seven universities produced 20% of the publications. I will note that my third alma mater, UCLA, doesn't even show up in the top 50. I will also admit when I include all years in the analysis, Portland State drops to 5th. Moreover, I'm not implying any causality.

Table 1. 2004-2013 Publications, by Organization (limited to organizations with 6 or more)

3. Research funding is not concentrated, though China is supporting a lot of it


Not all Web of Science entries include the funding source for the research, but it's becoming more common to do so. The top two funders identified are from China, followed by two university transportation centers in the U.S. – UCTC housed at UC Berkeley and OTREC housed at Portland State University. A number of agencies funded five of the publications, including FHWA and the National Cooperative Highway Research Program (NCHRP), which is supported largely through state DOT research funds. Also note that the search reveals a common problem with databases using entries from multiple sources and people. There are two more OTREC sources towards the bottom of the list that are entered with a slightly different title. I didn't spend any time cleaning up the data.

5. This is meant as a quick snapshot, not a deep, perfectly accurate analysis


As with any data collection and analysis that occurs in less than 4 hours, this isn't perfect. Yes, I know Web of Science doesn't have everything and is biased toward older, larger, established sources. I use Google Scholar quite a bit, but the analytics on Web of Science are more thorough, and Google Scholar has a lot of overlapping sources (e.g. a final report, conference presentation, and journal article all covering the same research product). And, there is a lot of research that doesn't show up in either source. As noted above, I didn't clean the data in any way and appropriate sources were missed and inappropriate ones (where bicycle means something else) undoubtedly included. I'm sure there are other caveats.